VW T-Cross is the smallest VW SUV with a good 110 PS and 200 Nm. A small family-friendly car with a clean performance, which is particularly popular because of its size and its clear cockpits. Despite the 1.0-three-cylinder, the T-Cross will, however, have some starting problems that bring annoying rights when starting and overtaking. The SUV really needs 11.3 seconds from 0 to 100 km / h. Continuous engine optimization, the acceleration of the VW mini SUV can be optimized: The tuning systems from DTE are a certain performance and a possible throttle response. The entry comes to the compact SUV on +21 HP at +39 Nm more and brings 1.9 seconds and acceleration between 50 - 100 km / h. The PowerControl X performance upgrade and the PedalBox also form the perfect duo for all Volkswagen models and offer full control over the various performance relationships. Thanks to a smartphone app, you can use the engine tuning system in the right way and in the right way. 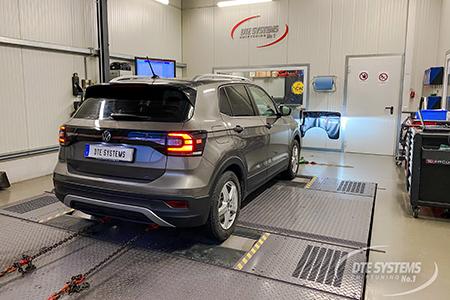 T-Cross on DTE's dynamometer
PowerControl X can be installed in the engine compartment in next to no time and can be used immediately. The tuning system from DTE optimizes all signals from the engine management and coordinates the control parameters in the best possible way. This gives Volkswagen noticeably more performance and considerable power for the start. In addition, the acceleration of your T-Cross improved by a strong 1.9 s between 50 and 100 km / h in 4th gear. You can always keep an eye on the important parameters of the service areas and coordinate them with one another. A comprehensive guarantee is included with the PowerControl X module. In addition, you will receive a parts certificate for the T-Cross when you buy the PowerControl X.

PowerControl X – performance in the VW T-Cross via smartphone 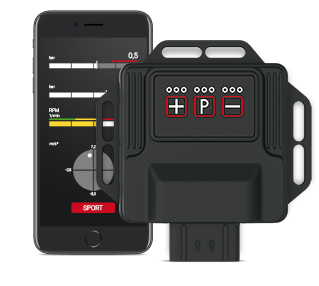 PowerControl X with smartphone control for your T-Cross
The performance enhancement PowerControl X can be easily controlled via your smartphone - and all that in a relaxed manner from the cockpit. With the app from DTE Systems you always have complete control over the different tuning programs and can adapt them to your personal driving style before every journey. In this way, the performance can be significantly increased and the speed noticeably increased when accelerating. The app is very easy to operate via the touchscreen: with a swipe across the mobile phone display, you can instantly switch between the Sport, Dynamic or Efficiency program. You can activate or deactivate the additional power of PowerControl X as required. You can view all the performance data of your vehicle directly via the smartphone app.

PedalBox in the T-Cross – optimize the response of your car 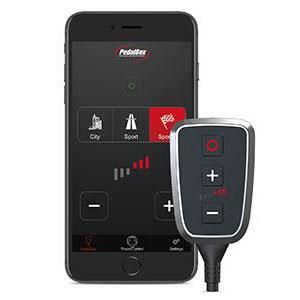 PedalBox with app for your T-Cross
Turbo start with the T-Cross: with the PedalBox from DTE Systems. Thanks to the improved throttle response, there are never again long seconds of thought when starting or accelerating. The smart accelerator pedal tuning pulls the compact sports car forward with momentum for an even more dynamic start or overtaking maneuver. The tuning is connected to the gas pedal in just three steps and is ready to go. You can switch between the different programs to set the response behavior personally. With the PedalBox, choose between the Sport, Sport-Plus or City program and benefit from pure driving fun thanks to modern accelerator tuning. You can fine-tune the PedalBox again using the plus and minus buttons.

Powerful tuning duo for the T-Cross 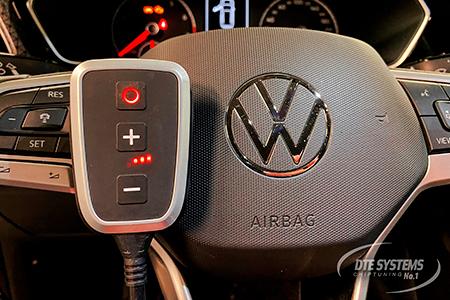 PedalBox for your T-Cross
PowerControl X and the PedalBox combine two powerful tuning systems that move driving even more: no waiting time when starting off or accelerating in between. The tuning systems ensure a significant increase in performance and improve the response time of the accelerator pedal. This gives your Volkswagen an incomparable driving experience in town and on the highway. Now configure your tuning system.

Operational safety is the top priority for DTE tuning products. With the latest technology of all additional control devices, all protective functions of the motors are retained and the legally prescribed emission values are not affected. To increase performance, all new DTE developments and products are checked using different test vehicles and in accordance with standard test methods on the in-house MAHA dynamometer. DTE Systems also offers a satisfaction guarantee and comprehensive 2 years product warranty which can be increased to an optional 5 years product warranty for all your VW T-Cross tuning purchases. Further information on the warranty certificate is enclosed with the product.

Between Polo and Golf - The mini SUV VW T-Cross

For years, Volkswagen has been offering a large number of compact cars and SUVs, which have become particularly popular in Germany and Europe. In the compact SUV category, Volkswagen also has some special features in addition to global cars such as the Golf, for example a mini SUV. With its Polo base, the T-Cross is the crossover car of the Tiguan models. With its length of 4.11 meters, it sits between the Polo and the Golf and, with its dimensions, is the smallest SUV model from VW. Overall, despite its 1.75 meters wide and 1.56 meters high, it offers plenty of space and gives the occupants a noticeable feeling of freedom. The rear also has a lot of storage space to offer: the trunk volume is between 395 and 455 liters and has around three centimeters of extra legroom for the passengers in the rear compared to the Polo. Thus, despite its size, the mini-SUV offers plenty of loading space for bulk purchases and strollers. With the continuous black reflective tape that connects the rear lights, it scores with many consumers with the new, unique Volkswagen design. The light strips are reminiscent of the American sedans from the 50s and 60s and are otherwise rarely found in the designs of other car manufacturers. In addition, it offers a large selection of colors: With colors such as orange (Energetic Orange Metallic), turquoise (Makena-Türkis Metallic) or metallic gray (Limestone Grey Metallic) and black (Uranograu), the driver can design his car individually, from brightly colored to simple. But the T-Cross doesn't just impress with its modern design. In the interior it impresses with the clear cockpit, especially with the digital equipment. The infotainment in the digital cockpit is clearly structured and is operated via touchscreen, as is typical for Volkswagen. A plus for many drivers are the physical direct selection buttons instead of the touch-sensitive display surfaces. The heart of the compact SUV also has a lot to offer: with the 1.0-liter three-cylinder TSI, the older petrol versions bring 95 hp and 115 hp, and the 1.5-liter four-cylinder TSI 150 hp. With the new 110 hp engines, the mini SUV offers clean steering and driving dynamics, sometimes thanks to a 7-speed dual clutch transmission. Despite the 1.3 tonnes, the front-wheel drive vehicle can generate a lot of power in traffic. With the fastest variant with 150 hp, the petrol engine goes from 0 to 100 km/h in 6.5 seconds and weighs 1,324 kg. The flexible chassis offers very good suspension in order to avoid strong rolling movements. And although the T-Cross is not equipped with all-wheel drive but with front-wheel drive, the precise reaction is maintained at faster speeds and corners. Overall, the T-Cross proves to be an everyday vehicle for city and highway.

DTE's VW engine tuning is available for the following models: