The PedalBox: The throttle response

The PedalBox is located between the accelerator pedal sensor and the control module and works by capturing the accelerator pedal signal and transforms it. Lots of manufacturers offer similar functions via standard "sports buttons". The PedalBox reduces the pedal travel necessary in order to reach a "throttle wide open" state (full throttle response). This allows the driver to exploit the full potential of the engines. 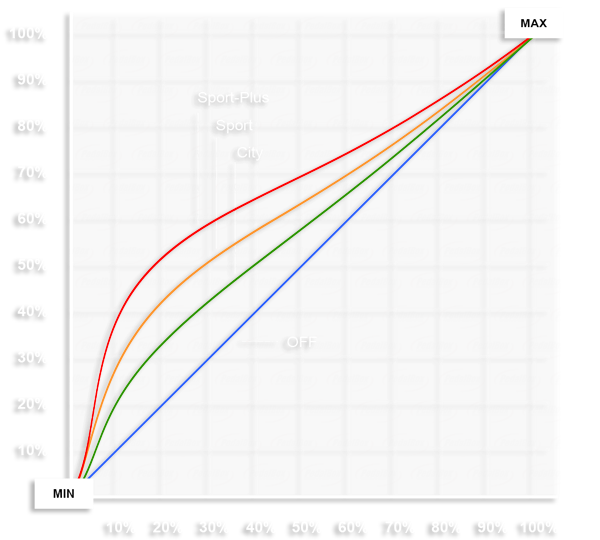 The "Throttle Response" curve shows the speed at which an engine responds to the driver's pressing of the accelerator. Deficiencies are evident here, especially at times of strong acceleration.

Throttle response has less to do with how much power a vehicle has but rather how long it needs to fully release this power, with petrol engines frequently performing better here than diesel ones in this regard.

Usually, a naturally aspirated engine is more powerful than a compressor or a turbocharger, a fact which is however not often noticed as the cars are given different response times by the manufacturer. But even when the same engine types are compared, ultimately a difference in response will be determined, as there are a wide range of factors that influence the response of an engine. The throttle response of a stick-shift or a semi-automatic car can be easily enhanced simply by changing gears – in the case of a small car trying to overtake another car for instance, by moving from 5th to 4th gear.

Most vehicles are equipped with a drive-by-wire system. Here, acceleration is achieved by way of an electric signal and not by the familiar Bowden cable, something that most people are not aware of. This system is called ETC or ECM. The problem is that these systems often suffer from a significant signal delay, which the PedalBox can compensate for perfectly. This means that more energy is available to the car once again.