Chip tuning PowerControl in the SUV for remarkable power

The Ford Explorer 3 already has an expressive performance with 349 HP and 625 Nm (combustion engine). At the same time, it moves with 6.0 s from 0 - 100 despite its 2 tons total weight. To give the SUV its maximum strength, the DTE developers have developed the PowerControl performance upgrade and the PedalBox accelerator tuning for the Ford Explorer 3.0 Ecoboost. 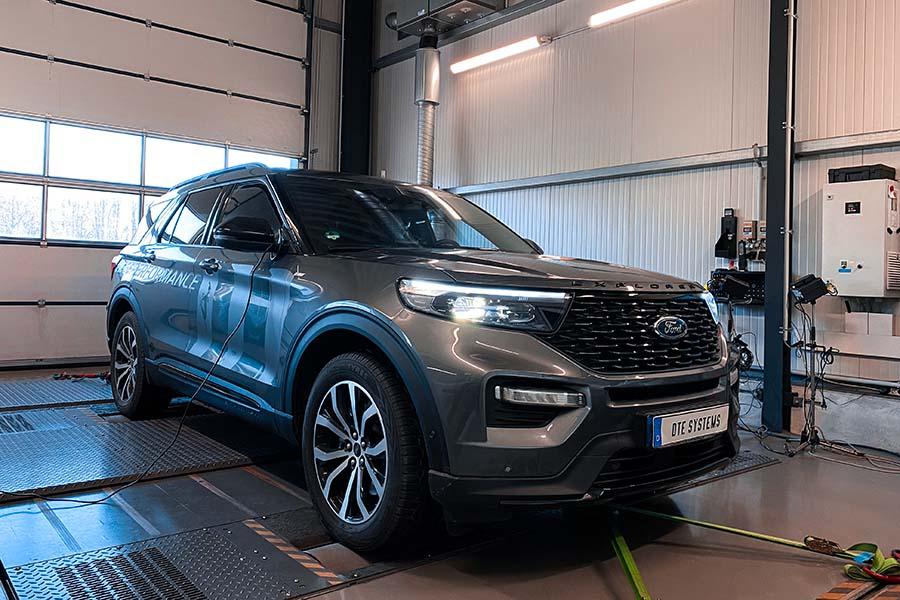 The Ford Explorer can already be seen as standard, PowerControl also tickles the remaining performance potential out of the SUV and makes it a powerful all-rounder. The DTE PowerControl Ford tuning gives the Ford performance model an impressive increase of +51 hp at 5760 rpm more power and +97 Nm at 3575 rpm more torque. At the same time, the dynamics and speed of the Ford Explorer also increase. 2.2 s quicker between 80 - 160 km/h (5th test gear) brings the SUV from 10.3 to 8.1 seconds over the highway. The improved driving dynamics and powerful performance are immediately noticeable and ideal for fast overtaking and a strong performance on any terrain.

Better acceleration in the Ford

M´With the PedalBox+, connected to the accelerator pedal, response can be improved instantly. For this purpose, the Ford Explorer driver has four programmes at his disposal: City, Sport, Sport-Plus and Standard. At the touch of a button, the SUV becomes a sports car. The accelerator tuning is also available via smartphone control: with the appropriate PedalBox app, the tuning box can be easily switched on or off via smartphone. In addition, all individual settings for the Ford Explorer can be saved in the smartphone app. This means that the PedalBox+ always starts with the desired settings for the SUV.

Chip tuning for the Ford Explorer